Traditional deadlifts are one of those exercises that stimulate just about every muscle in the human body. The deadlift is often thought of as a back exercise — and it is, but it’s also an incredible leg-builder, as you’re essentially dropping into a squat in the bottom position. Sometimes called “king of exercises” because of its effectiveness in building back and leg strength, the deadlift is also on of the three lifts performed in competitive powerlifting. Deadlifts will pack meat on your upper back as well as any rowing exercise, and build you a set of python-like spinal erectors. And they are about the only exercise other than squats that will build you a thunderous set of thighs.

However, if you don’t use proper form, it’s easy to injure your back. Always wear a weightlifting belt. Don’t use heavy weight until you become comfortable with the lifting motion.

How To Deadlift: Proper Form

STARTING (INITIAL) POSITION: Grasp a barbell on the floor with a shoulder-width mixed grip (one palm forward, one back — this helps you maintain your grip on the barbell during the exercise) and squat down, bending the knees and hips. Bend your knees until your thighs are almost parallel to the floor. Your back should be at about a 45-degree angle (see image below). Look up and make sure you maintain the natural curve in your lower spine while bending deeply at your knees. 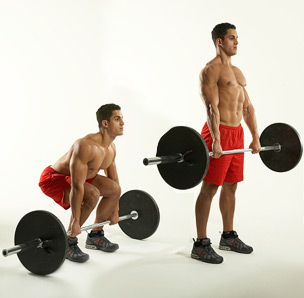 ACTION (MOVE): Keeping your spine straight and elbows stiff, stand upright, lifting the bar upward to hip level. In other words, begin lifting the barbell, driving up with your legs, and gradually straightening your back and knees. Keep your arms straight. As you finish lifting (once standing), pull your shoulders back slightly and thrust your chest forward to stand fully erect. Pause. Lower the barbell along the same path (close to your body all the way down) to the floor. With each repetition, you place the barbell on the floor and start the entire lifting motion again.

In a manner of speaking a deadlift is just a squat with the bar held by the hands and not across the shoulders.

Key Points To Check When Deadlifting

Some people find that this exercise hurts their knees. If it hurts your knees, don’t do it. However, you might first try wrapping your knees with an elastic bandage for the exercise. Many bodybuilders do this to support their knees and avoid problems with them. 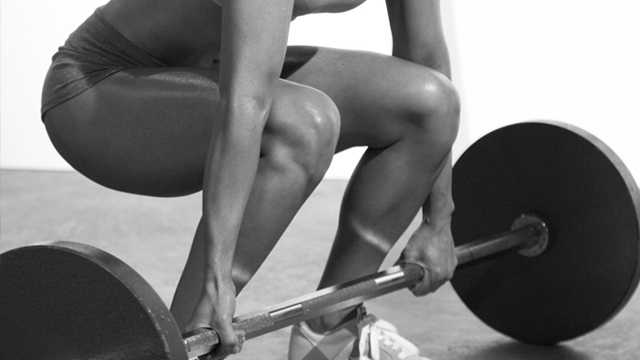 November, 2019
How’s the Summer body coming along ? We are … Read More